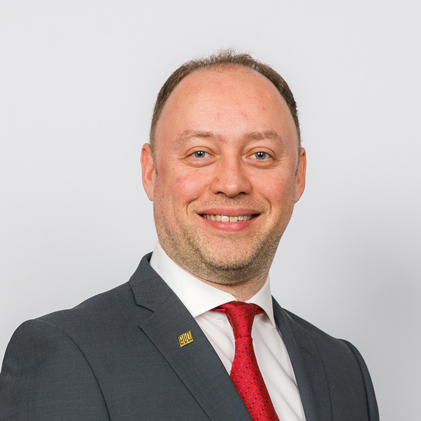 Peter Demchenkov became ALIDI CEO in 2006. He is responsible for the global business development and the strategic management. Under his managеment the company has achieved remarkable results, becoming the leader in the sphere of logistics and distribution. During the years of his leadership ALIDI increased its turnover from 3,8 bln RUB to 33,7 bln RUB. The number of branches increased from 16 to 34, the number of employees increased from 1800 to 6600.

In 2009 and 2010 Peter Demchenkov was named one of the best top-managers of St. Petersburg and the Leningrad Region by «Business Petersburg» newspaper. In 2011 he became the winner of “Entrepreneur Of The Year-2011” Award by Ernst&Young in Russia. In 2014 Mr. Demchenkov became the leader among top managers of logistic companies according to Finam.

Peter Demchenkov was born in 1973 in Leningrad. In 1996 he graduated from St-Petersburg Polytechnical University by the specialties “Automation and management in technical systems” and “Marketing, management and external economic activity of enterprises”. From 1997 to 2004 he worked in P&G Company's business development department, in 2004-2005 he was a Development Director of the Investment bank CIT Finance. 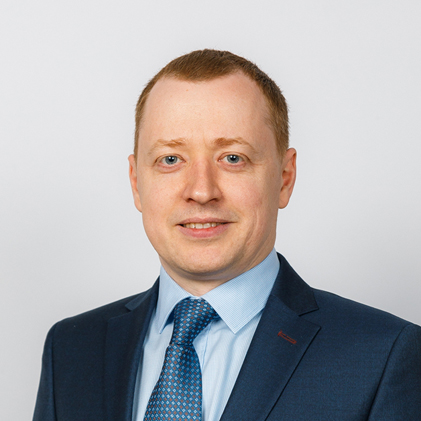 Igor Tomadze is responsible for operational administration of the ALIDI branch network. Also he is responsible for strategy implementation at the regional level, effective teamwork between the branches, settlement of administrative and economic questions. Igor was born in 1976. In 1993 he launched his career in ALIDI as IT-manager. From 1997 to 2004 Mr. Tomadze changed his career field and became the head of the financial department of the company. From 2004 to 2007 he was the head of the property management department. 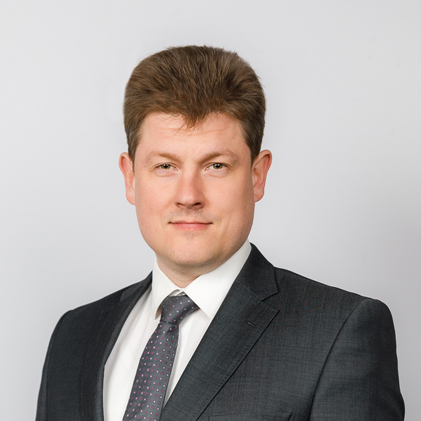 Ivan Sychev is responsible for Procter&Gamble’s commercial direction in ALIDI. He was born in Gorky. Mr Sychev graduated Nizhny Novgorod Diesel Building College and Nizhny Novgorod State Technical University. His career in ALIDI began in a role of P&G sales representative. A year on he became sales manager, then he was appointed regional manager. From 2006 to 2011 Ivan was the Head of P&G direction in Central division of ALIDI. 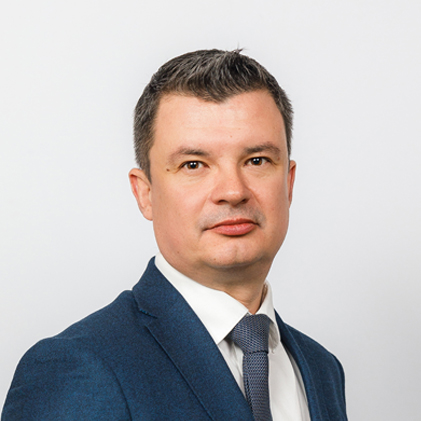 Alexey Kolegov supervises all the commercial activities of the company: distribution contracts, marketing, development of the key areas of activity (logistics, importation, BTL). Mr Kolegov was born in 1973 in the Komi Republic. Alexey is a historian by education; he graduated Syktyvkar State University in 1995. After graduation, he taught in secondary school for two years. Later Alexey was head of the sales directions in several businesses. Immediately prior to joining ALIDI in 2005, Mr Kolegov held posts of retail manager, key account manager, sales manager in «Nestle Foods». 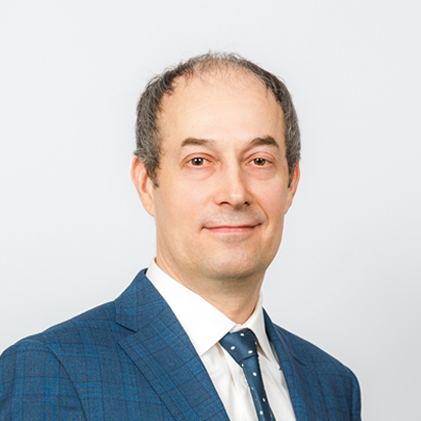 Sergey Leonenko is responsible for the development of the following sales departments in ALIDI: general distribution, HoReCa, Nestle Waters.

He was born on July 1, 1968 in Kirovsk, Murmansk region. He is a graduate of the Radiophysics Faculty of St. Petersburg Polytechnic University Peter the Great. Sergey has many years of experience in senior positions in various distribution companies (including ALIDI in 2006-2007) and large retail chains. 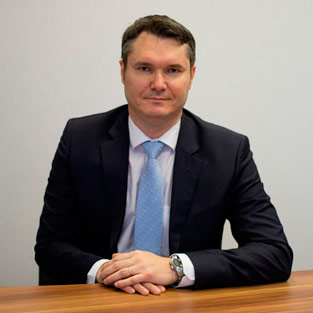 Denis Lobkov is responsible for the development of company online and offline retail business projects.

Mr. Lobkov was born in 1977. In 1999 he graduated from the economic faculty of St.-Petersburg institute of ecology, politics and law. In 2005 he received the certificate of IPAR (Institute of professional accountants of Russia) in the direction of the Chief Financial Officer. During 8 years Denis worked his way from an ordinary economist to the CFO. Prior to joining ALIDI he get vast experience in financial management in such large industrial holdings like «Community «North-West» and «Euroservice», where Mr Lobkov held position of Finance and Economics Director.

Ivan Solin is responsible for functional management of logistics of ALIDI distribution contracts. He was born in 1979 in Gorky. Ivan graduated Nizhny Novgorod State Technical University in speciality «Automobiles and fleet». He began his career in ALIDI in 2007 as a manager of transport logistics. Prior to 2009, Mr Solin was responsible for functional management of logistics in branches of ALIDI Central division. From 2009 to 2011, he led projects and was engaged in business processes description in the framework of ALIDI logistic direction. Ivan holds the position of Chief Operation Officer from November 2011. 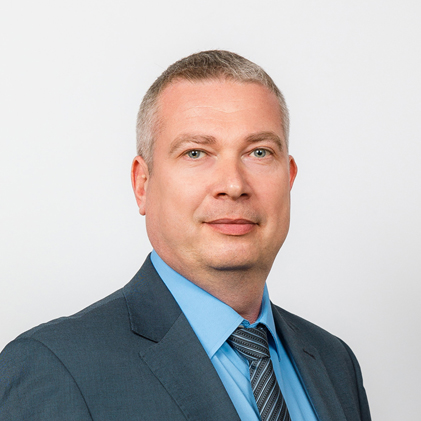 He was born in May 19, 1971 in the city of Gorky. In 1996 he graduated from the Volgo-Vyatskaya Academy of Public Administration under the President of the Russian Federation with a degree in State and Municipal Administration. In 1999, Oleg Surkov joined ALIDI as a Sales Representative. Then he worked as Sales Director of Nestle and Gillette departments. In February 2008, Oleg became the Director of ALIDI branch in Nizhny Novgorod. 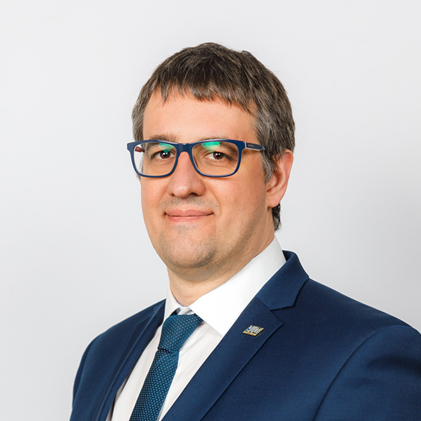 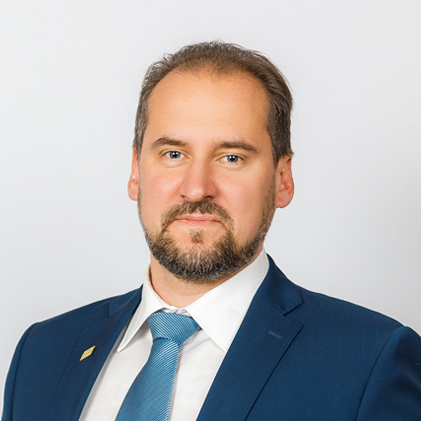 Maxim Glazunov is responsible for all aspects of economic, physical, internal and information security of the company. He was born in 1976. In 2001, Maxim graduated St. Petersburg University of the Interior Ministry of Russian Federation in speciality «Jurisprudence». In 2003, he finished economic faculty of Moscow Institute of Law. In 2015, Mr Glazunov received MBA certificate in St. Petersburg Polytechnic University in speciality «International business». Prior to ALIDI Maxim worked in the sphere of economic security in large commercial companies: Lenenergo, TGK-1, Raiffeisen bank. Also Mr Glazunov did military service in Internal Affairs Agencies of Russian Federation for 9 years. 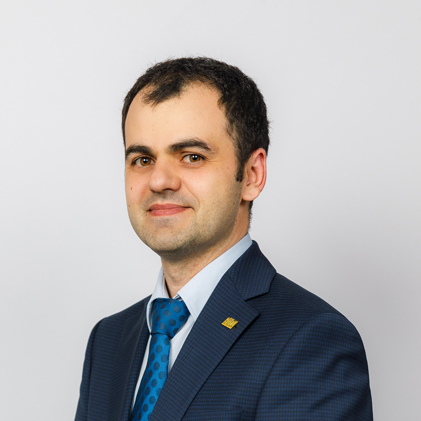 Pavel Ovchinnikov, is responsible for the financial policy at ALIDI, building an effective system of document flow in the company, as well as minimizing the financial and legal risks associated with its activities.

He was born on July 12, 1980 in Gorky. In 2002, he graduated from the Nizhny Novgorod branch of the Higher School of Economics, with a degree in Finance and Credit.

At the beginning of his career in 2001, we worked as analyst in Mars distribution company, then worked for a while at Wimm-Bill-Dann.
Since 2006, Pavel Ovchinnikov has been working at ALIDI.  During this time, he has worked his way from the budgetary controller to the Deputy financial director. In January 2018 he became the Finance Director of the ALIDI Group of Companies. 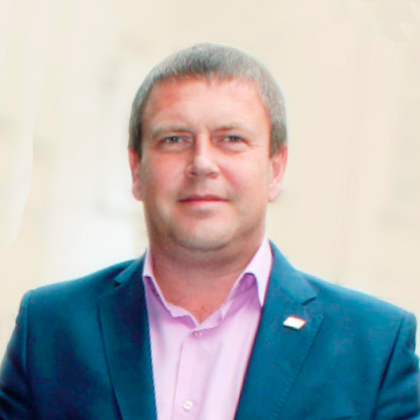 Vladimir is responsible for business development in the macroregion «ALIDI South».

Vladimir was born in Ulyanovsk on 09 May, 1975. Vladimir has started his carrier at ALIDI in a position of sales representative of Procter & Gamble products sales department in June 2000. During next 18 years he had the carrier progression into sales manager and branch manager in Nizhny Novgorod, Ulyanovsk, Ryazan, Vladimir, Penza and Saransk. 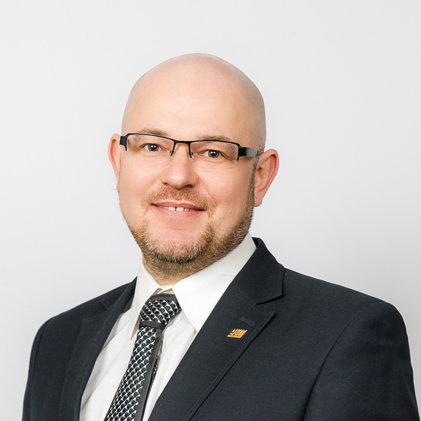